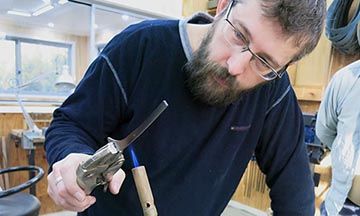 Alistair was introduced to knives when he was a young man in Scouts. Many years ago, a chance conversation with his local butcher lead him to discover that the butcher made custom knives. Alistair’s butcher was kind enough to teach him a few things about knifemaking and gave him some steel to make his first knife.

Unfortunately, before Alistair could finish his first knife his family moved. That knife blank remained in a desk drawer, unfinished, through eight more house moves but was never forgotten. Fifteen years later Alistair got back into knife making with a course at Tharwa Valley Forge. After completing his course, and 15 years after it was started, Alistair finished the knife he had begun making with the butcher.

As a knifemaker and a perfectionist, Alistair loves the mechanisms involved with making folding knives. Whether it is getting the spring to fit flat on a slipjoint or the perfecting the lockup of a linerlock, getting everything to fit together is a very rewarding process.

In addition to teaching Folding Knife courses at Tharwa Valley Forge he makes and sells his own knives, including knives that are sold by Spyderco.