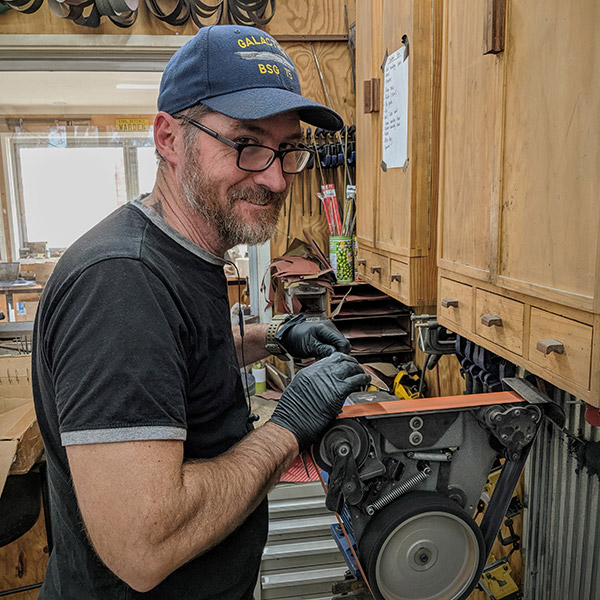 Baz is a man of many talents, some of which generate income. He has been making knives since 2012 and has a talent for being able to make anything he puts his mind to.

He is a full-time cutler at Tharwa Valley Forge and also instructs on knifemaking, blacksmithing, and metal sculpture courses.

The first knife Baz made was from a lawnmower blade he found under a welding bench. He took a look at it and thought he'd have a go. Which is very much the way Baz seems to approach most of his endeavours and to which his peers credit his success.

Using pallet wood, some copper pipe and the lawnmower blade, Baz made a small utility knife. It's still in use today, although Baz says he wouldn't call it a knife these days even though it still cuts quite well.

Baz has come a long way since then, with the superhero Ironman playing a part in his growth as a knifemaker. To raise money for the Starlight Foundation - and to give sick kids in hospital a thrill - Baz made the world's first full-size all-steel Ironman suit.

Throughout the process he encountered many technical and logistical challenges. He received a lot of support online from total strangers. By way of saying 'thank you' Baz took to making knives for those whom had helped him out.

Baz served in the Army and saw active service in East Timor. In 2018 he took a course with Tharwa Valley Forge as part of our Veterans & Families Maker Program in 2018. Since then he's become a valuable full-time member of our team.

You can see more of his work on his website, including more of the stroy about his full-size Ironman suit.