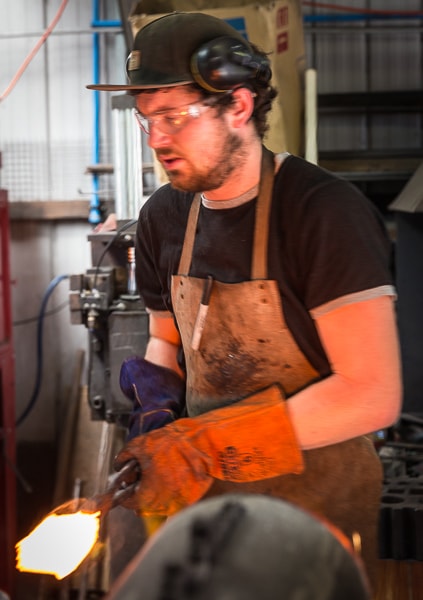 A knife maker since 2008, Jackson has worked at Tharwa Valley Forge since 2016 making custom knives and teaching classes. Inspired by Master Bladesmith Jerry Fisk and motivated by Karim, Jackson aspires to constantly push his creative limits and grow as an artist.

With a lifelong affinity for recycling and machining timber, Jackson has previously worked at the iconic Canberra joinery, sawmill and recycled timber yard Thor's Hammer.

Jackson's personal blade brand, Rumble Knives, reflects his extensive use of recycled and repurposed timber and metal. He often works with materials from old buildings, street trees, and obsolete machinery imbuing his creations with a history of their own.

The most interesting knife Jackson has made to date was a custom knife made entirely of items from a rural property. The handle was made from a tree that had been struck by lightening, the fittings were made from copper pipes dug up from the property, and the blade was forged from the leaf springs of a 19th century horse buggy from the property.

Asides from being asthetically pleasing, Jackson loves working with timber because it is always alive and moving; many people don't appreciate the fact that timber is always moving in response to its surroundings. This fact combined with timber's fascinating mechanical properties makes Jackson feel that timber provides an excellent challenge to his creative abilities.

In addition to timber, Jackson enjoys working in Damascus because its nature complements that of timber and echoes many of wood's characteristics. For Jackson, working with Damascus evokes many of the skills required for working with wood, and he uses it in his designs to complement the features of the exotic hardwoods he often works with.

Jackson spends most Australian winters in the United States where he runs a summer camp for teenagers. Although we miss having him around, Jackson enjoys never experiencing winter and the challenge of working with young people (which proves to never be boring).